I managed to get a hold of an Acer S271HL monitor from eBay. Was a bargain, paid literally less then a quarter of its retail price including next day delivery. Used one without cosmetic damage on it. The only catch was that it wasn’t 100% functional. Was advertised with a fault, screen flickering. I felt ambitious to repair it and pressed the Buy It Now button.

The Nature Of The Fault

The monitor arrived on the next day and I connected it to my laptop then switched it on. It was 100% working! So I waited a few minutes, half an hour and nothing happened. I watched a movie on it and and there was no sign of any faults. I thought “YES”, they’ve made a mistake and sent me a functional one. I started to use it.

After 2 days of continuous use, the bottom right corner started to turn orange/red color and it slowly spread upwards. Half way through the flickering started.

Soon, this stopped and the right part of the screen blanked out leaving the left part bright white, which then changed to a white and black strip.

I didn’t have more time to take the monitor apart, so I left it for a few days. Meanwhile I’ve done a bit of research to find out more about this kind of problem. I found that the flickering is a common issue due to the cheap and not reliable components, specifically the capacitors. The Acer S271HL is (was that time) one of the cheapest monitor on the market. To keep the price low, manufacturers build their products from cheap components.

Before I took the monitor apart, I decided to switch it on to see the problem again. The screen came on and it was operating normally. I waited and waited… Nothing. Finally after 5 hours the problem appeared again just like previously. It was time to take it apart!

Disassembling the monitor is fairly easy. First need to remove the stand which is held with one screw. Under it there is another screw. Also the two screws of the HDMI connector need to be removed. The DVI and VGA connectors can be left out, they are not attached to the plastic case.

The front and the back of the plastic housing can be separated with a screwdriver or a plastic card starting at one of the bottom corners. Keep the monitor faced down. When its done the main board becomes visible.

When I had a look I noticed straight away that the LVDS cable (Low-Voltage Differential Signaling) was not connected properly to the main board.

I hoped that by connecting the LVDS cable back was going to solve the problem. I turned the monitor on. It fixed the black & white screen issue, however the flickering stayed.

Next, I disconnected all the cables from the main board and had a closer look at the PCB. Looked fine.

After removing the metal housing, on the top layer there was no sign of visible damage, like a burnt component. There are 2 individual boards connected together with a 6-wire cable. On the left there is the power supply and on the right the LVDS logic board.

First I started to replace the 3 capacitors on the power supply’s board. 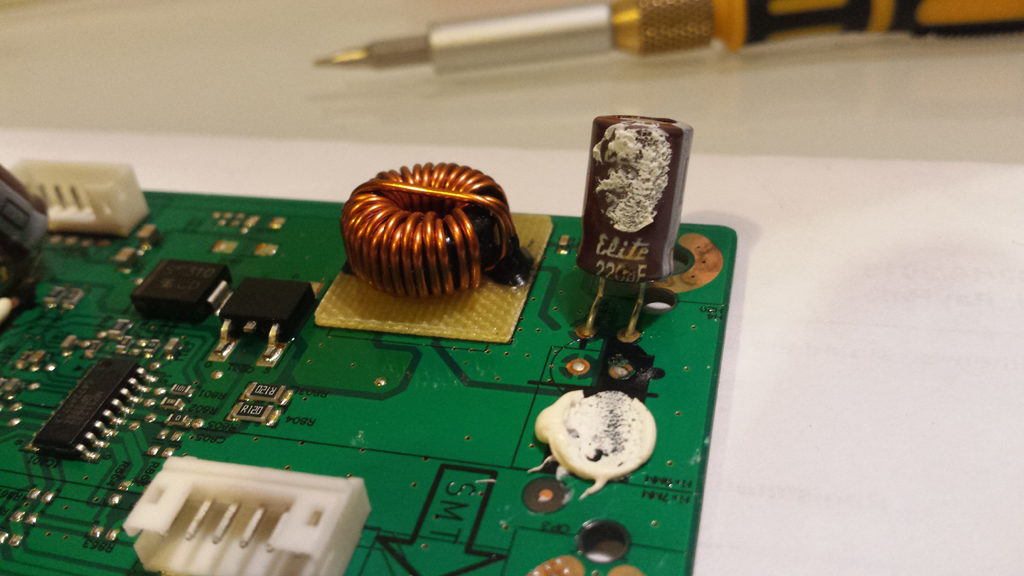 To desolder the capacitors I used a regular soldering iron and a desoldering pump.

I heated up one connection at a time and used the desoldering pump to get rid of the solder. It was a bit tricky as the parts were soldered on the bottom and on the top layers. After I removed most of the solder, I started to move the capacitor. On the bottom layer, I heated the connection on one side meanwhile pulled the capacitor towards to the opposite side and vice versa. It slowly shuffled out.

On to top layer of the PCB I cleaned off the glue, to make it ready for the new capacitors.

As I mentioned earlier I had to be careful with the physical size of the capacitors. They were noticeably bigger and they were just fit under the metal case.

After I finished with the power supply board, it was time for the logic board.

On the LVDS logic board I replaced the 2 big capacitors. The method was the same as before.

When I finished replacing all the parts I put the monitor back together. Connected it to the power supply and to my laptop. I switched it on. The screen came on with a clear picture.

I wasn’t convinced yet. It worked before for a few days so I left it run continuously.

After a week of testing the screen was performing like this:

Crystal clear picture, no flickering or any sign of trouble. IT WORKED!