Before the upgrade I had to find out which CPUs are compatible with my old laptop. I had to put the following things into consideration.

My first question was, what are the supported CPUs by my motherboards chipset? And the second was, what is the chipset on it?

It is a Sony VAIO VPCEH2P0E laptop with an Intel Core i5-2430M processor (CPU) and an Intel HD Graphics 3000. I have already upgraded it with extra memory and a SSD drive and I thought it’s time for a CPU upgrade too.

I used CPU-Z to find out more about the laptop. It revealed more details regarding the current CPU and the motherboard’s chipset.

The dual core CPU has a base frequency of 2.40GHz which can go up to 3.00GHz when the turbo boost is active. Some important things for the upgrade are displayed too such as the Max TDP 35W and the Socket rPGA 988B (a.k.a Socket G2).

The ‘Mainboard’ tab contained the motherboard’s chipset (Southbridge) which is a Mobile Intel HM65 Express Chipset.

The BIOS version R0200Z9 is also presented on this page, which I used later to do some research.

I started my search based on the mainboard’s Intel HM65 chipset. The website www.cpu-upgrade.com gave me a nice list of the supported processors for my motherboard. I went through all the CPUs started from the bottom to check, which one of them has Socket G2 (rPGA 988B) packaging. After creating a list of the potential candidates and I checked their benchmarks on www.cpubenchmark.net, I picked the Intel i7-2860QM. Here is a comparison with my old CPU.

To me it looked a significant performance increase, over 112%! The socket types above are not matching, however Intel kindly supplies this chip with the suitable socket.

And will it work? It will physically fit. What about the BIOS support? And the increased TDP? After a long searching, I found on a forum that somebody successfully has replaced their i3-2330M CPU with this model having the identical socket and R0200Z9 BIOS version. The post looked genuine, so I thought I’ll give it a go too! Although the 45W TDP issue was still there to solve. It’s 10W higher and thus will produce more heat.

It was time to disassemble the VAIO and have a look at it inside. I have never done this before after so many years of usage – apart of memory and SSD update.

The reason why I hadn’t taken it apart was 3 stuck screws due to the plenty blue Loctite on their threads. I managed to stripped them.

I needed to get a left-turn screw extractor drill bit which finally did the trick. The screws were so tough that the screw heads just broke off during the extraction.

Finally I got it open!

When I looked at the copper heat sink plate on the processor; it seemed to be too small. And the heat sink tube too.

The width of the i7-2860QM’s core is way wider and the copper plate on mine was barely covering the core. And I knew my stock heatsink won’t be able to handle the 45W. Needed a new cooling system!

I went back online to look for an alternative cooling solution; only focusing on Sony VAIO parts. And after many hours/days of searching, I found a look alike one. 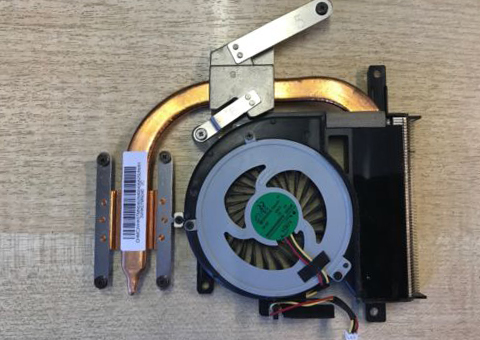 Same layout – by meaning the CPU is above the fan – and a thicker copper heat sink tube as well as a wider copper plate… Just as  I wanted! This cooler is for Sony VAIO SVE151 series with an integrated GPU. It has to cool two processor cores. That’s why the tube is thicker. My laptop was not fitted with an onboard GPU but I could see the design markings for one. Did Sony use the same motherboard layout for the two VAIO models? I think so! Which means the heatsink and fan should work on mine with some modifications. So I ordered one!

While I was waiting for the heatsink, I order another one. The same as my original one to have it as a donor. I knew I had to do some modifications and I didn’t want to sacrifice the one in the laptop.

They arrived at the same time and I wanted to compare them straight away.

First I focused on the size of the copper plates.

Just as I thought! On the left is the SV151’s copper plate and on the right is the same as mine. There is a significant width difference. But will it be wide enough?

I knew that the heatsink could work and the BIOS maybe compatible with the Intel i7-2860QM processor… I took my chances and ordered the CPU too.

Meanwhile, I started to plan the modification.

Looking at the two heatsinks, I could see some obvious differences between them. First, on mine (left) the additional metal plate which sits on the motherboard’s chipset; the other one didn’t have it. Second, the GPU’s heatsink (right) which mine didn’t have that.

At this point I couldn’t try it in the laptop as it was under continuous use, however I started the modification process.

Cutting The Plastic For The Heat Sink Tube

I noticed some additional differences on the plastic case which holds the fan. I decided to keep the original one as it would definitely fit. So I had to install the replacement grid and heat sink tube on it. I took both of them apart by carefully peeling the adhesive tape off from the top of the grid and around them.

The grid with the copper heat sink tube nicely slipped out which was held by the adhesive tap only. I could have a better look at them. The grid with the thicker tube didn’t fit into the original fan socket. There was a slight curve which I had to cut out for it. The width was fine though.

My Dremel tool was perfect for the task and I managed to cut out the corner without breaking the whole lot.

I also had to cut off a bit from the surrounding plastic of the grid; it was sticking out too far. After a few tries and cuts I manged to put the grid into the original fan case. It fit just as I imagined!

The screw hole on the top of the plastic aligned with the copper plate too.

The next step was to get rid of that chunky GPU heat sink plate. Or at least some of it. I had to cut it very very carefully to not to damage the copper tube itself. I used my Dremel tool again.

It was a slow and dirty process but I managed it! I had to wear eye protection due to some sparks and the all metal bits flying around.

Transplanting the plate for the motherboard’s chipset was next. It was mounted with some heat transfer adhesive on the original copper tube. I just simply broke it off!

Then I cut a piece out for the wider copper tube and cleaned off the remaining adhesive.

First Try Of The Modified Heatsink

Finally it was time to try it out inside the laptop. I took the laptop apart again. This time it was easier as I didn’t tighten the screws. I removed the fan and heatsink and inserted my partly modified one.

Super! It did fit perfectly!

I softly tighten the four screws and positioned the heat sink plate for the Intel HM65 motherboard chipset. Then I tighten its screw and marked it on the copper tube.

At this point the grid was still loose in the black fan socket. So after cleaning the surfaces, I put the original adhesive tape back. Fortunately it still stuck very well.

To permanently mount the previously prepared plate on the tube, I used some good quality heat transfer adhesive (Arctic Alumina).

It’s a 2-part adhesive. Before applying it, I cleaned all the surfaces. I mixed a little together, not too much, and added to the heat sink plate. After positioning it I clamped it. Some excess adhesive squeezed out which was absolutely fine!

While I was waiting for the adhesive to set, I prepared the Intel Core i7-2860QM CPU.

After 2 hours of waiting the adhesive finally set.

As a final touch, I covered all the holes with some left over tapes for a better airflow.

On the CPU I applied some high performance thermal grease for the best heat transfer between the processor’s core and the cooling plate. The motherboard’s chipset had a thermal pad on it which I didn’t touch.

It was time to place the heatsink inside the laptop. The first time when the replacement i7-2860QM CPU met with the modified heatsink. I had some doubts. Is the adhesive set in position? Is the CPU’s core properly covered with the copper plate? And then boom! Everything was aligned! I tightened all the screws and installed the fan.

I didn’t try out the Core i7 CPU in the laptop beforehand so I had no idea if it was going to work at all. I put the laptop back together and pressed the power button. IT BOOTED! However I couldn’t hear or feel the fan. It wasn’t spinning for about 2 minutes. Then suddenly it started. Huh!

I was very curious how my DIY heatsink performs. So before I did some stress tests with the old Core i5 processor to see how high the temperature can get.

And then I performed the same with the i7 CPU.

The temperature stopped at 83°C / 181°F and didn’t go higher! I’m very pleased with the final result. The whole system got noticeably faster!

For next, I’m thinking to upgrade the motherboard with an Intel HM76 chipset on it. I found that the Sony VAIO SVE151 range has a very similar board layout with integrated GPU and support for 3rd Intel i7 CPUs.